This stretch takes you through beautiful hilly countryside southwest of Frederikshavn. First through Bangsbo Deer Park, Bangsbo river valley and then up over Øksnebjerg, a hill reaching 106 meters above sea level and offering stunning views of the bay of Ålbæk Bugt all the way to Skagen.

The Bangsbo area
Heading out from the town of Frederikshavn, the Ancient Road starts at the Tourist Office. From here you travel just a few kilometres to reach the Bangsbo area where there are many experiences and places to enjoy. Among the attractions are Bangsbo Deer Park, Bangsbo Botanical Garden, Bangsbo Museum, Bangsbo Manor, and a nature playground. You can also take a detour up Pikkerbakken, a hill offering views across the town, the bay of Ålbæk Bugt and even as far as Skagen on a good day.

Kongehøj and Borgbjerg
Kongehøj and Borgbjerg, which can be seen from the road, are part of Donbæk Gravplads, a prehistoric burial site with 60 barrows, which are spread out over a narrow hillscape. A number of Neolithic urn graves were discovered in the early 1900s in addition to a number of different objects, including a gold bracelet.

Archaeologically, this is a very exciting location where new discoveries are made every few years. There is public access to the area, so you are free to explore the barrows.

You now head along country lanes until you reach the top of Øksnebjerg, a hill offering absolutely magnificent panoramic views in almost all directions. To the southeast you see the seaside town of Sæby and as far as the island of Læsø to the east. To the west you see a stunningly beautiful hillscape and to the north the bay of Ålbæk Bugt with Denmark’s northernmost town of Skagen in the distance.

Øksnebjerg
The name "Øksnebjerg" (the Oxen Mount) indicates that this was a site where cattle were herded before their long journey down the Ancient Road. Many local manors and large farms founded their wealth on the exports of cattle. The steer were gathered in large flocks from different estates in Vendsyssel and herded down the Ancient Road by professional drovers. The first goal was Southern Jutland, where the steer after a strenuous trip were fattened only to be herded further south into Europe. Customs accounts from the 1600s show that in good years about 50,000 cattle were herded down the Ancient Road.

Understed
From Øksnebjerg you travel along a gravel road, which is the old road on the east side of the ridge. Here you enjoy fine sea views all along. Reaching the village of Understed you will here find the sacred springs of Understed and Understed Church.

You'll also find a nice and peaceful shelter approx. 1 km beyond Understed. The route passes right by, so it should be easy to spot.

Karup
Wandering along gravel roads you now head westward though the hilly landscape to the town of Karup. Along the way, you can make a small detour to Karup Church and another sacred spring called Helligøbben.

Hørbylund
From Karup you head towards the manor of Hørbylund Hovedgård and you are now about halfway between Frederikshavn and the hillscape of Jyske Ås.

THE NEXT STAGE: HØRBYLUND-JYSKE ÅS 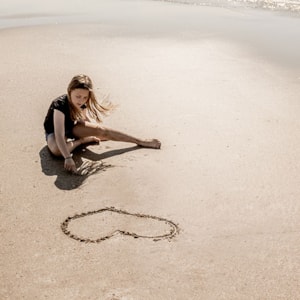 Special museum for art on paper. The world's largest collection of bookplates. 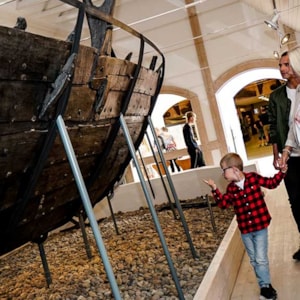 The manor house, which in the late 19th century was frequently visited by the country’s leading poets, including Herman Bang and Gustav Wied, is now a... 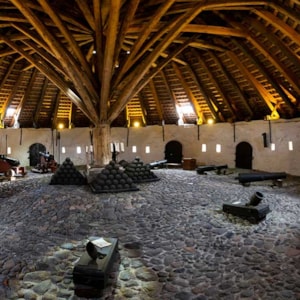 Martello tower built in 1686-1690. The top floor (cannon deck) houses a range of artillery.The lower floors have exhibitions of the history of Flads... 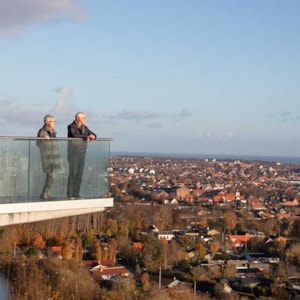 Read about Pikkerbakken and the view >> 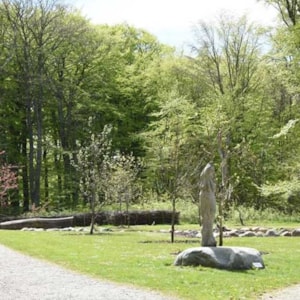 Beech forest covering 100 ha with a rich variety of bird life & wildlife. Animals roam free within the fenced-in area of the forest. A trail leads thr...

Directions: From Frederikshavn follow the road from Bangsbo, past the Bangsbo Museum heading towards Gærum.The road is parallel to the stream and has ... 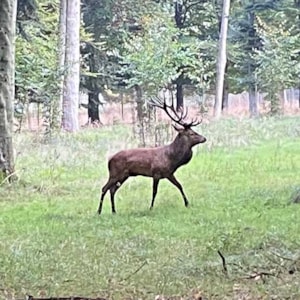 44 acres of fenced-off woods and meadows with around 40 free-range fallow, red and sika deer. Particularly interesting in the spring when the animals ...

95 m above sea level, with views of Ålbæk and Sæby, and over the hilly landscape to the west. In clear weather, both the Aalbæk bay to the north and t...