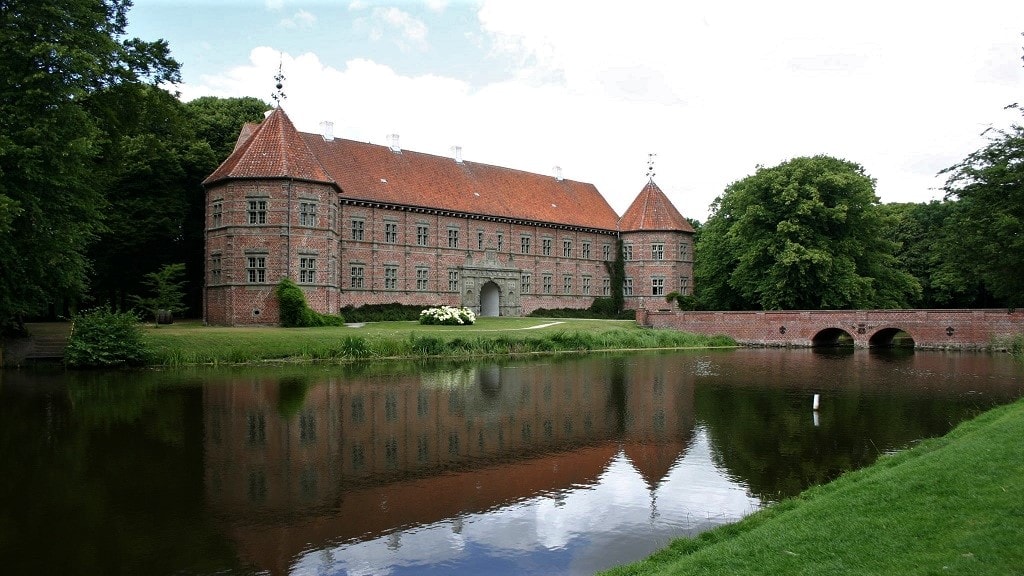 Behind the thick walls you will find one of Denmark's most beautiful Renaissance buildings, built between 1481 and 1590. In the castle, you will find interesting private art collections and horrifying ghost stories.

Enjoy a historical day with the family and discover the old stories of Ingeborg Skeel and Stygge Krumpen. You can visit the dungeon or try to find the blood stain that cannot be washed off.

Meet Raphaél, Marie Antoinette, Napoleon and the Danish Count Ejnar Overbech-Clausen in a world filled with royal antiques and fairytales.

The entrance to the park with Denmark's widest moats is free.

Enter the medieval world and experience how servants, monks, soldiers, craftsmen and tradesmen used to live, when the medieval fair is held each year in July.

The Story of Ingeborg Skeel

Denmark's most famous ghost, Ingeborg Skeel, is said to be haunting Voergaard Slot. The story of the domineering Ingeborg Skeel from 1580 sends a shiver down the spine of both large and small. Maybe you will be so lucky as to see a glimpse of her in the dark basement or in the room in the high tower. There are numerous stories about how the white lady appears at night in the corridors and hallways of the castle. Ingeborg Skeel was hated by many because to her abilities as a businesswoman and her obsession with power. Many people perceived her as malicious and suspected her of being an accomplice of the Devil. The rumour has it that she whipped her first child to death, and that she pushed the mayor of Voergaard into the moat, from which he drowned. Furthermore, it is rumoured that she abused several maids, and that she chopped off both hands of a farmhand for stealing firewood. Ingeborg Skeel died in 1604.

The Story of Stygge Krumpen

Stygge Krumpen lived at Voergaard with Elsebeth Gyldenstjerne, who he stole from her former husband, knight Bonde Due.

Esquire Jakob Andersen handed over Voergaard farm (later castle) to the Bishop of Børglum, Niels Stygge Krumpen. In this period, Voergaard was expanded and reinforced due to Stygge Krumpen's desire to transform the farm into a castle and a main office for his entire diocese, which almost covered the entire area of Vendsyssel. Skipper Clement's army of peasants conquered Voergaard in 1534, and in 1536, the castle was assigned to the king.